The ceasefire, clinched after marathon talks in Moscow advocated by President Vladimir Putin, was meant to halt fighting to allow ethnic Armenian forces in Nagorno-Karabakh and Azeri forces to swap prisoners and war dead.

But within minutes of the truce taking effect from midday on Saturday (08:00 GMT), both sides accused each other of breaking it. 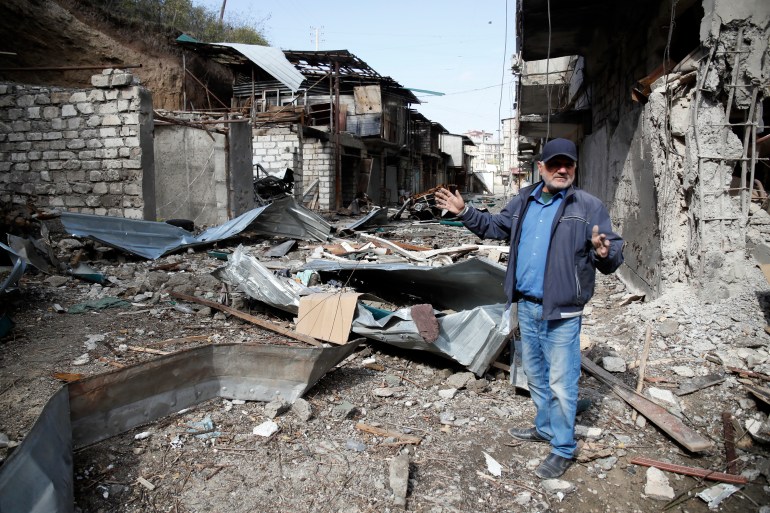 The Armenian defence ministry accused Azerbaijan of shelling a settlement inside Armenia, while ethnic Armenian forces in Nagorno-Karabakh alleged that Azeri forces had launched a new offensive five minutes after the truce took hold.

Azerbaijan said enemy forces in the disputed region were shelling Azeri territory. Both sides have consistently denied each others’ assertions about military activity.

Under the international law, Nagorno-Karabakh is recognised as part of Azerbaijan.

But ethnic Armenians, who make up the vast majority of the population, reject the Azerbaijani rule and have been running their own affairs with Armenia’s support since a devastating war in the 1990s following the collapse of the Soviet Union.

Earlier on Saturday, Russian Foreign Minister Sergey Lavrov, who helped mediate the ceasefire talks in Moscow, said in a statement the truce had been agreed on humanitarian grounds.

The International Committee of the Red Cross would help make the truce work, he said.

“The specific terms of the ceasefire still need to be agreed,” said Lavrov, who said the two rivals had also agreed to enter into what he called substantive peace talks to be held under the auspices of the Organization for Security and Cooperation in Europe’s (OSCE) Minsk Group.

But Al Jazeera’s Bernard Smith, reporting from Stepanakart earlier on Saturday, said the ceasefire has been breached. “To what level or extent is not immediately clear,” he said.

Azeri President Ilham Aliyev, meanwhile, told Russia’s RBC news outlet that the warring parties were now engaged in trying to find a political settlement, but suggested there would be further fighting ahead.

“We’ll go to the very end and get what rightfully belongs to us,” he said.

Azerbaijan’s Foreign Minister Jeyhun Bayramov also said the “humanitarian ceasefire” would only last for as long as it took for the Red Cross to arrange the exchange of the dead.

Speaking at a briefing in Baku, he complained that the status quo on the ground in the mountainous region did not suit his country and that Azerbaijan hoped and expected to take control of more territory in time.

Al Jazeera’s Sinem Koseoglu, reporting from Tartar in Azerbaijan, said the ceasefire “has not been welcomed by the Azeri people” either.

“They believe that after 30 years … this is the first time they have the upper hand. The have military power with more sophisticated weapons. They believe a long truce or long-term ceasefire will only help Armenians build their positions,” she said.

Meanwhile, Iranian President Hassan Rouhani and his Russian counterpart discussed the latest developments in Nagorno-Karabakh in a phone call on Saturday.

Rouhani welcomed the ceasefire and said Iran continues to be ready to facilitate a peaceful resolution, but repeated concerns about the reported deployment of foreign fighters.

“The presence of terrorists in the conflict can be dangerous for Iran and Russia, and the entire region,” Rouhani said, according to the Iranian president’s website.

Putin, on the other hand, reportedly briefed Rouhani on Russian efforts to resolve the conflict and said he understood Iranian concerns.

“All neighbouring countries must try to end war and bloodshed and strive for conflict resolution through negotiations,” he was quoted as saying. US:China Tension: US to ban TikTok downloads, WeChat use from Sunday WHATSAPP TO STOP WORKING ON MILLIONS OF PHONES FROM 1 JANUARY