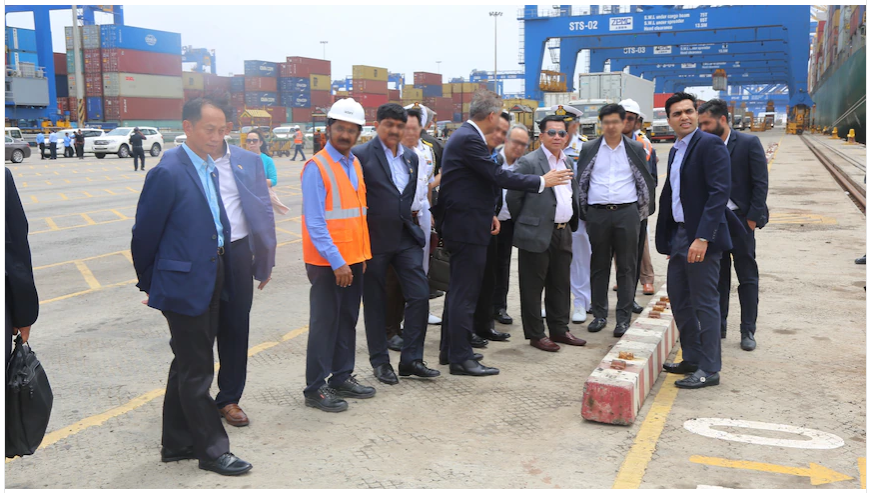 (ABC News)The Adani Group is paying up to $US52 million ($68.1 million) to a Myanmar military-controlled company that has just been slapped with sanctions by the United States over human rights violations.

Leaked documents in a report by human rights lawyers and activists obtained by the ABC reveal the scale of Adani’s cooperation with the junta over a proposed container port in Yangon.

Video and photos show Adani Ports’ boss met with the junta’s top general in 2019, contradicting the company’s claim last month that it had never “engaged with military leadership” in Myanmar.

The US government sanctions against Myanmar Economic Corporation (MEC) are likely to ramp up pressure on the Australian government’s Future Fund to dump its $3.2 million investment in Adani Ports, which also owns North Queensland operations linked to the Carmichael mine.

The leaked documents, from the Yangon Region Investment Commission, show Adani’s subsidiary is paying $US30 million to MEC in “land lease fees”.

Millions of dollars in fees

A joint report by the Australian Centre for International Justice (ACIJ) and activist group Justice For Myanmar (JFM) says another $US22 million in “land clearance fees” is likely to also flow to MEC as the owner of the port site.

“What these documents reveal in particular is the amount that was provided to the MEC, a Myanmar military conglomerate that is controlled and owned by the Myanmar military [which] stands credibly accused and is being investigated at the International Criminal Court and the International Court of Justice for crimes against humanity, war crimes, and even in the case of the crimes against the Rohingya, genocide,” she told the ABC.

“The concern here — as has been publicly stated by the United Nations fact-finding mission — is that these military conglomerates provide essential financial revenue streams direct to the Myanmar military.

“Adani has been put on notice several times publicly, and they’ve refused to disengage from their Myanmar deal with [MEC] and that’s a real problem.

“This money indirectly could be financing the Myanmar military to conduct international crimes.”

Australian lawyer Chris Sidoti was a member of a 2019 United Nations fact-finding mission to Myanmar, which warned foreign companies against doing business with MEC and named Adani Ports as one of those engaged with the military conglomerate.

Mr Sidoti told the ABC the ACIJ and JFM report established links between the Myanmar military and a company “intimately involved in the Carmichael coal project in Queensland”.

“The question for Australia and Australians is whether we want to be hosting a company that is contributing to the enrichment of the Myanmar military,” he said.

“THE QUESTION FOR INVESTORS IN ADANI IS WHETHER THEY WANT TO FUND THE OPERATIONS OF THE MYANMAR MILITARY, BECAUSE THAT IS WHAT THEY ARE DOING INDIRECTLY BY INVESTING IN ADANI.

“This is a question especially for sovereign wealth funds and pension funds that should have a highly ethical basis for their investment decisions.”

A spokeswoman for Adani Ports said the company was “watching the situation in Myanmar carefully and will engage with the relevant authorities and stakeholders to seek their advice on the way forward”.

She said the Yangon International Terminal project was “fully owned and developed by” the company.

“It is an independent container terminal with no joint venture partners.”

Last month, following Myanmar’s coup, the Adani Group issued a statement denying it had engaged with military leaders over the 2019 approval of its $US290 million port.

“We categorically deny having engaged with military leadership while receiving this approval or thereafter,” it said.

This was days after the US government hit Min Aung Hlaing with a travel ban over his alleged role in “extra-judicial killings” and “gross violations of human rights”.

A Myanmar state media report showing Adani Ports chief executive Karan Adani exchanging gifts with the general on his visit to an Adani port at Mundra, in Gujarat, India was uploaded to the Myanmar military’s official YouTube channel

“THIS IS OBVIOUSLY DIRECTLY INCONSISTENT WITH THE STATEMENT PROVIDED BY ADANI PORTS AND THE ADANI GROUP EARLIER THIS YEAR,” SAID MS ARRAF, THE ACIJ HUMAN RIGHTS LAWYER.

She said credible allegations of crimes against humanity by Min Aung Hlaing were “publicly available information, and foreign corporations like Adani Ports would have known about this information, it would have been absolutely clear to them”.

An Adani Ports spokeswoman said the general’s visit was hosted by the Indian government, and its officials accompanied him to Mundra Port, which was “only one location out of multiple sites on this visit”.

“Mementos were exchanged as a cultural courtesy, which is customary practice,” the statement read.

In December, the US froze Min Aung Hlaing’s American-based assets, and criminalised transactions between him and anyone in the US.

‘Vital lifeline for the military junta’

Adani Ports owns the Abbot Point Coal Terminal near Bowen, and a rail company to haul coal from the controversial Carmichael mine.

We offer tailored front pages for local audiences in each state and territory. Find out how to opt in for more Queensland news.

The US hit MEC with sanctions last week, targeting what the State Department’s Office of Foreign Assets Control director Andrea Gacki said was “a vital financial lifeline for the military junta”.

US Secretary of State Antony Blinken said the sanctions were “the most significant action to date to impose costs on the military regime”.

On Saturday Myanmar experienced its bloodiest day since the coup, with at least 114 people killed, reportedly including children.

That prompted the Chief of the Australian Defence Force to join the military heads of 11 other nations in condemning the Myanmar junta.

A spokeswoman for the Future Fund told the ABC it had no plans to dump its $3.2 million investment in Adani Ports in the wake of US sanctions and evidence of cash flows to the junta.

“We are aware of the matter but have no plans to divest the holding in Adani,” she said.

“WHERE THE FEDERAL GOVERNMENT APPLIES SANCTIONS, THE FUTURE FUND DOES – AS YOU WOULD EXPECT – OBSERVE SUCH MEASURES.”

Ms Arraf said ACIJ had “no confidence in Adani Ports that they will respond to growing action against MEC and its military controllers”.

“That’s why we’re calling on investors, shareholders, governments all around the world to take action against Adani Ports, because of their consistent refusal to disengage with the MEC in Myanmar,” she said.

“We’re extremely disappointed with the response of the Future Fund.”

She said if Adani were a US company it would now be “moving very quickly to review and suspend their operations because of the very serious implications that they could be in violations of sanctions laws”.

The ABC has contacted the office of Foreign Minister Marise Payne for comment. No oil leakage from X-Press Pearl