Three brothers of President Gotabaya Rajapaksa now hold top posts in his government. Two of his nephews have official positions, too.

The first attempt by a Rajapaksa to return to power in Sri Lanka was brief.

In 2018, former President Mahinda Rajapaksa was sworn in as prime minister, even though the man he was supposedly replacing said he still held the job. Mr. Rajapaksa eventually backed down, though not before chairs were smashed and chili powder and fists were thrown in Parliament.

But a year later, his brother Gotabaya was elected president. Since then, the Rajapaksas have stamped their name so thoroughly on Sri Lanka’s government that it feels like a family enterprise — albeit a struggling one, with the economy in tatters and discontent rising.

On Thursday, another brother, Basil, was sworn in as finance minister, a move that one analyst, Bhavani Fonseka, said “consolidated the Rajapaksa family rule.”

“We now have four brothers and several other members of the family holding key positions in government,” said Ms. Fonseka, a senior researcher with the Center for Policy Alternatives, a research institute based in Colombo, the capital. “In the face of a weak opposition and no real checks and balances on the executive, prospects for Sri Lanka’s constitutional democracy are deeply troubling.”

Gotabaya Rajpaksa, 72, gave himself the additional post of defense minister shortly after becoming president. He soon made Mahinda, 75, the prime minister, also putting him in charge of the Ministries of Religious Affairs and Urban Development. (He was the finance minister, too, before Basil got the job.) The eldest brother, Chamal Rajapaksa, 78, was named the minister of irrigation, as well as the state minister of home affairs and of national security and disaster management.

Then came the second generation. Namal Rajapaksa, 35, Mahinda’s son and a former captain of the national rugby team, was named minister of youth and sports. He is also the state minister of digital technology and enterprise development. Chamal’s son Shasheendra Rajapaksa got a portfolio too long to fit on a business card: He is the minister of state for “paddy and cereals, organic food, vegetables, fruits, chilies, onions and potatoes, seed production and high-tech agriculture.”

The family has been in power for much of the past two decades. During his 10 years as president, Mahinda Rajapaksa ended Sri Lanka’s decades-long civil war in 2009, crushing the rebels known as the Tamil Tigers. His brothers held key posts then, too: Gotabaya led the Defense Ministry, where he was accused of human rights abuses in the final stretch of the war, while Chamal was the speaker of Parliament and Basil was a minister in the cabinet.

But in the 2015 election, Mahinda Rajapaksa was denied a third term as president, after having pushed through a constitutional amendment to allow himself to pursue one.

The coalition government that replaced him brought hopes of reform and a promise to put the war-ravaged country on a path to reconciliation, in which war crimes would be investigated and the grievances of minorities, which the rebels had made their rallying cry, would be addressed.

But the new government was so bogged down by bickering and dysfunction that many voters apparently yearned for the order the Rajapaksas had imposed. The bombings on Easter in 2019 — in which, despite repeated warnings from India’s intelligence service, militants launched simultaneous attacks that killed more than 250 people — helped Gotabya Rajapaksa to handily win the presidential election months later, campaigning as a strongman.

Since then, the coronavirus pandemic and the government’s response to it, which has included putting strict restrictions on movement and essentially closing the border to tourists, has added to the economic woes in Sri Lanka, which had already been caught in a cycle of debt.

Basil Rajapaksa, the new finance minister, played important roles in both of his brothers’ presidential campaigns and is seen as a pragmatic strategist within the family. Some analysts and opposition politicians saw his appointment as an acknowledgment by his brothers that urgent action was needed to address the economy and the discontent.

But others wondered why a non-Rajapaksa could not be found to do the job.

“I don’t think we have faced such a serious crisis in our balance of payment in the last several decades. This means professional, technical input to solve this situation and get this country out of it,” said Harsha De Silva, an opposition lawmaker and an economist. “The Rajapaksas believe that expertise lies only among their family — that if one brother can’t do, the next brother will try, and if that fails, a third brother will do.”

“You need discussions, you need ideas thrown around in a crisis,” Mr. De Silva added. “This family — they all think alike, and we have seen that because they have been in office since 2005, except for a few years.” 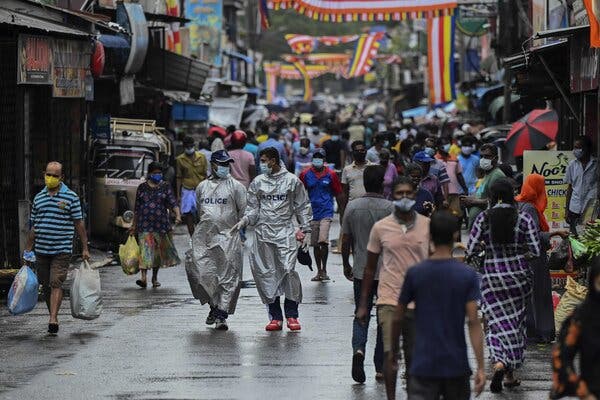 In recent months, Sri Lanka has seen repeated demonstrations by thousands of people with a variety of demands, including justice for those who disappeared during the war and better compensation for health care workers. The government has cracked down on the protests on the grounds that they flouted Covid restrictions; some called that a pretext, noting that the guidelines allowed spas, restaurants and stores to open.

Human rights activists have expressed concern about Gotabaya Rajapaksa’s centralization of power and his distribution of key posts to family members. They also say he has reversed the progress Sri Lanka had made toward some degree of accountability for crimes committed during the war.

Rights groups say Mr. Rajapaksa has used the police and judiciary to harass dissidents and has obstructed investigations into war crimes, which he characterized as “political victimization” of security officers. He has also pardoned military officers who were accused of grave abuses.

Last year, Mr. Rajapaksa pushed through constitutional amendments that strengthened the powers of his office. Sri Lanka’s Bar Association has warned that the amendments allow the president to act with legal impunity and have removed much-needed checks and balances from the country’s system of government.

The amendments also eliminated a clause that prohibited dual citizens from holding key government positions. That made it possible for Basil Rajapaksa, who holds American citizenship, to become finance minister.

A final hurdle was that Basil Rajapaksa was not a member of Parliament, where cabinet ministers come from. That obstacle was surmounted when a lawmaker from the governing party resigned, and Basil was presented as his replacement through a party list.

“They don’t see this as anything to apologize for — and their constituencies don’t either, so long as they deliver tangible and symbolic benefits for them,” said Alan Keenan, the senior consultant for Sri Lanka at the International Crisis Group. “But that is the problem — they aren’t delivering. By increasingly shutting down avenues for political critique and protest, they risk serious conflict.” PM to be sworn in tomorrow