Ahead of the 2021 United Nations Climate Change Conference, also known as COP26, an advert in The National, a Scottish paper, speaks out against continued deforestation and land grabs undertaken by the Sri Lankan military against Eelam Tamils.

The advert, as part of a campaign led by Scottish Tamils with the support of other Eelam Tamils from around the world, details the ongoing military encroachment on the homeland of the North-East. It cites the work of the Oakland institute which extensively details continued “deforestation in Vavuniya and Mullaithivu Districts in order to settle the Sinhalese population from the South under the Kivilu Oya [development] project”.
It further adds that:

“Many other areas under the Nedunkerny divisional secretariat area in Vavuniya District…have been deforested, and an estimated 2,000 Sinhalese have been settled in the past few years. Steps are being taken to settle 3,000 more Sinhalese in these areas and 2.5 acres of deforested land is being provided to each person. Incentives of up to 800 rupees [-US$4] per family per day are provided to prevent the settled people from returning to their native places”.

See the full advert below. 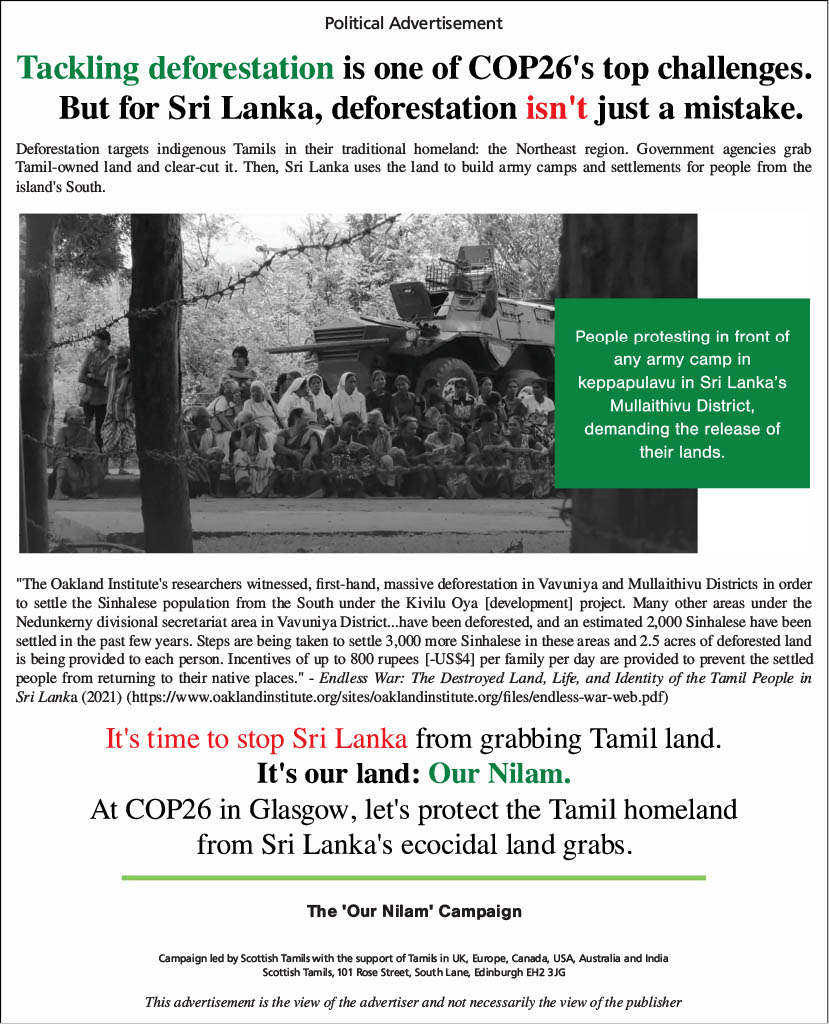 The Oakland Institute details how in Mullaitivu alone, the military has “acquired more than 16,910 acres of public and private land” and has set up “at least seven Army camps and five naval bases located just 15 km from the village of Alampil to the village of Kokkilai in Mullaitivu”. Sri Lanka’s forestry department has further expropriated 32,110 acres of land in the area. Officials from the forestry department have frequently intimidated journalists attempting to report on the encroachment akin to land grabbing of forests found on land owned by Tamils.

Last year Tamil Guardian’s Mullaitivu district correspondents were assaulted in Murippu, Mullaitivu, whilst reporting on illegal logging and timber smuggling in the area. Kanapathipillai Kumanan and Shanmugam Thavaseelan, who caught the smugglers on video, were attacked with iron rods. The attackers then destroyed the video recordings on their cameras and phones and looted their jewellery and money before fleeing. (TG) Rs. 2.5 Billion worth 200kg Drugs Busted with 4 people in Marawila